”If it is possible to derive happiness from an aesthetic experience, one can feel that happiness right here, despite the gloomy dark water, despite the texts about the climate and Corona in the catalogue. For it is shockingly beautiful.”

Experience an art exhibition while floating through the darkness of Cisternerne.

Visitors are invited to experience a milestone work by an artist who constantly challenges our ways of communicating and interacting both with each other and with other species. During the period of the exhibition the water constantly seeping through the concrete construction of Cisternerne forms a subterranean sea black as night. For this reason the exhibition must be experienced from small boats.

Saraceno was originally educated as an architect and is occupied by exploring alternative forms of housing and ways of living for a sustainable future. He finds inspiration in everything from spiders and bats to astrophysics, philosophy and engineering art. Nature’s processes and transformative potential are an endless source of inspiration in Saraceno’s work, which is precisely why Saraceno and Cisternerne are a perfect match. Cisternerne is a man-made cultural space originally constructed in 1856-59 to provide the citizens of Copenhagen with clean drinking water, but at the same time nature is omnipresent in the dark chambers, in which stalactites now grow down from the vaulted ceilings and the water incessantly seeps through the old ancient concrete.

“Tomas Saraceno has transformed Cisternerne into a subterranean water basin dominated both by grim darkness and captivating beauty.”

In Event Horizon visitors drift in boats. Like small satellites they float through the old cisterns and pass illuminated spider’s webs and gleaming silver spheres on their way. The hovering sculptures form part of a carefully choreographed composition, like moons and planets locked in their orbits. The spider’s webs are a reminder of how we are closely linked with and dependent on the world around us, how everything from the smallest microbes to the universe affects our existence just as we constantly affect our surroundings. Actions that on the face of it seem harmless can have unforeseeable consequences.

The exhibition’s title Event Horizon refers to the area around the universe’s black holes, from which nothing – not even light – can escape. Event Horizon is a metaphor for that point of no return, which mankind is facing, when climate change has irrevocable changed our conditions of life. Despite the unmistakably dystopian connotation of the exhibition’s title there are gleams of hope in the subterranean, impenetrable dark of Cisternerne. For is it possible that mankind will be able to adjust to a world that seems forever changed? Perhaps there are alternative possibilities of existence far beyond our comprehension.

“In Saraceno’s world down in Cisternerne, figures and forms make a fleeting appearance, are mirrored and disappear again. It is sublime, magical, sacral. And if one surrenders and allows oneself to be led down into his black hole, a wonderful, intense and unforgettable total experience awaits one.” 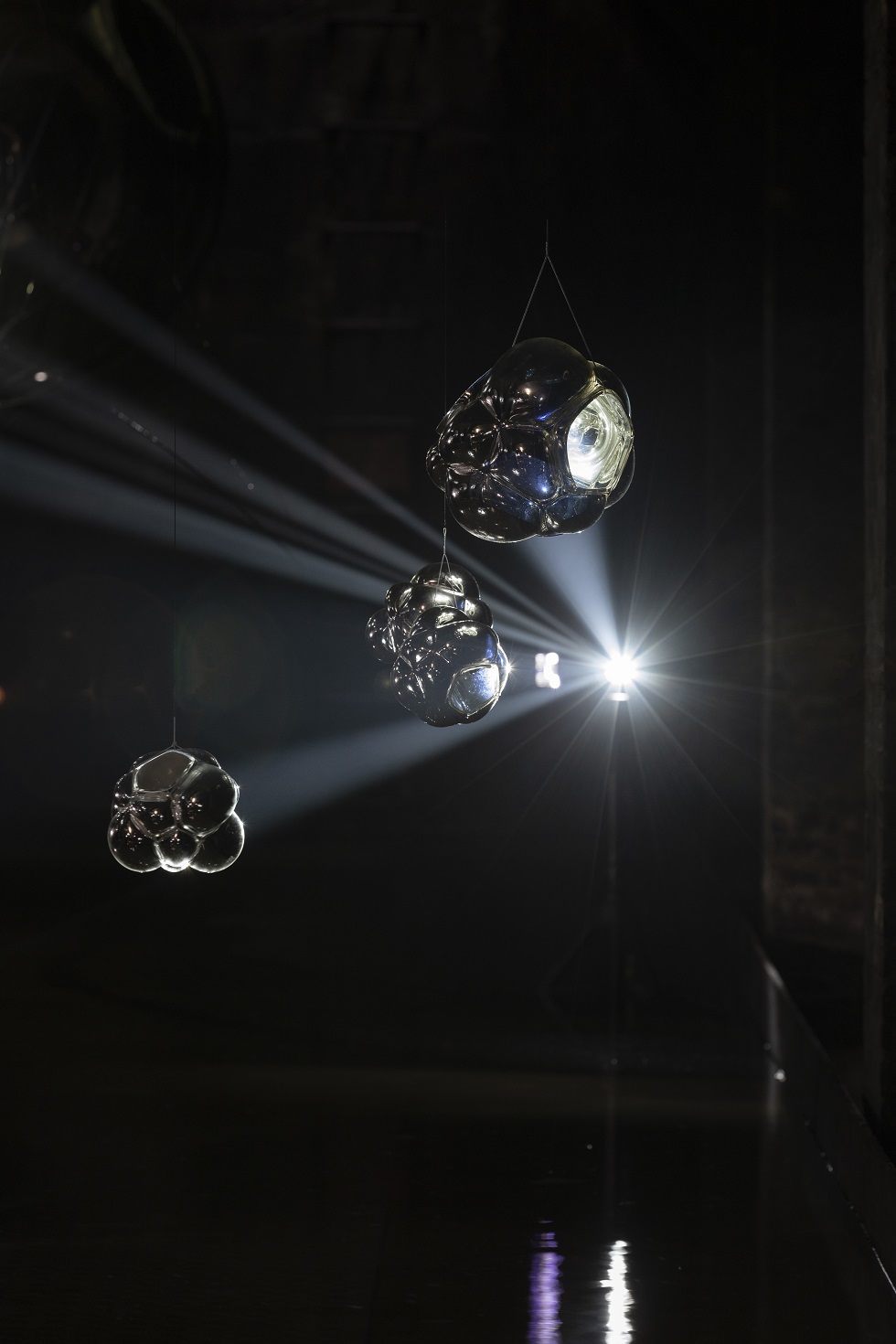 Tomás Saraceno (b. 1973, Argentina) is a star on the international art scene and he has been compared to such diverse artists as Marcel Duchamp and Leonardo da Vinci. He is originally educated as an architect, but in 2003 he graduated from Staatliche Hochschule für Bildende Künste, Städelschule, Frankfurt am Main. In 2009 he studied at NASA’s International Space Studies Program in Ames, California.

In 2009 Saraceno won the prestigious Calder Award. Saraceno lives and works in Berlin.